Briefing and Exhibition on Captiol Hill: How to Evaluate Disruptive Inventions 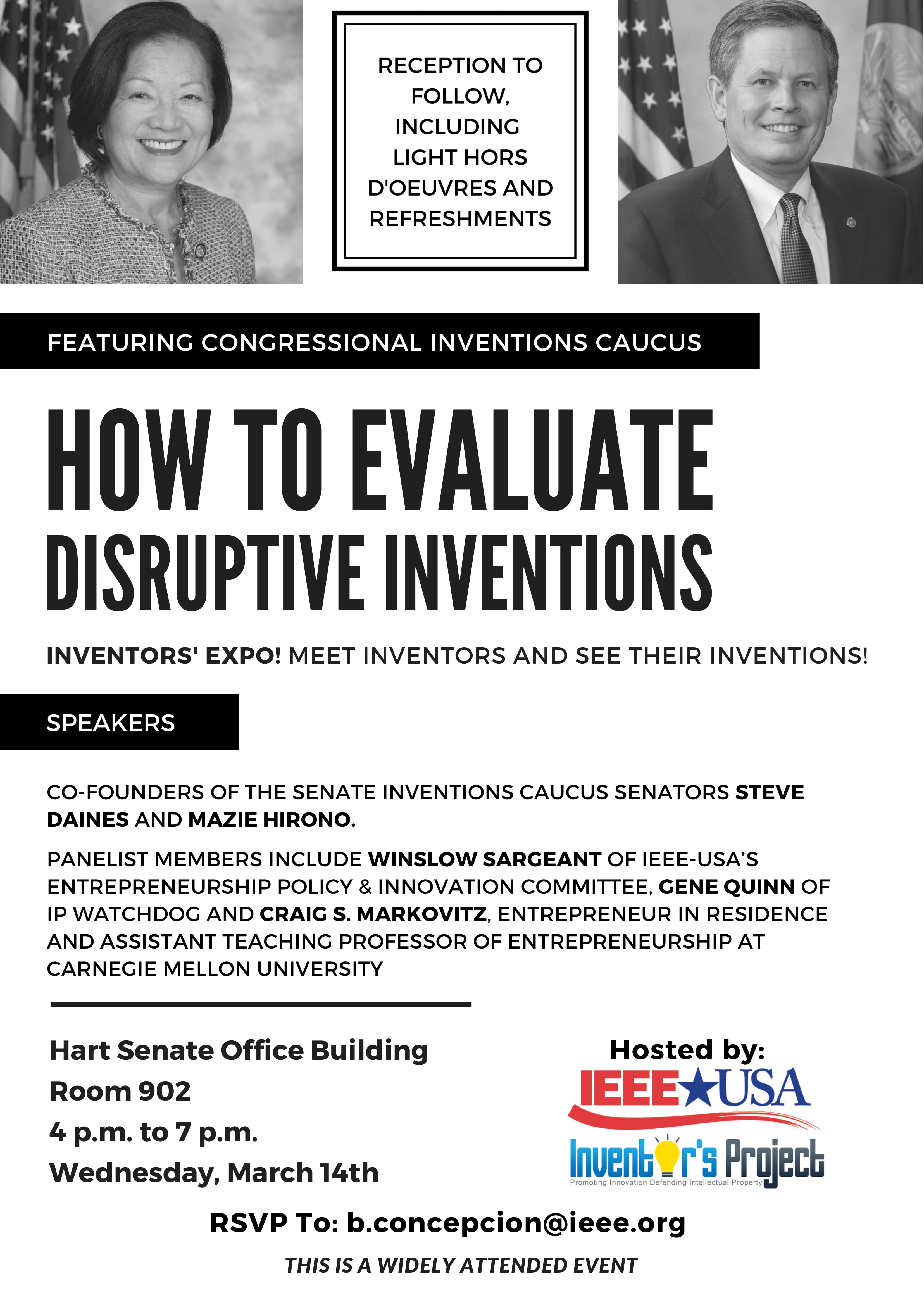 Along with Raymond A. Mercado, Ph.d., United Inventor Association, Inventor-center, Paul Morris, Adrian Pelkus, and Paul Hayes
in Support of the Petitioner, the Inventor’s Project filed a brief this week for Amici Curiae.

A Life of Inventing Before Lawmaking

Members of Congress Tell Their Stories as Successful Inventors and Entrepreneurs

A Blog from USPTO’s Leadership

On April 26, the U.S. Patent and Trademark Office (USPTO) celebrated World Intellectual Property (IP) day in Washington D.C., as well as across the country in Houston, Chicago, and Silicon Valley. The theme of this year’s World IP Day is “Innovation – Improving Lives.”

One program which is a prime example innovation improving lives is Patents for Humanity, the USPTO’s awards competition recognizing innovators who use game-changing technology to meet global humanitarian challenges. This year’s winners found new and innovative ways to administer and provide health care solutions in some of the most disadvantaged regions of the world. Watch the USPTO’s Patents for Humanity video to learn more about the program’s mission and impact.

Under Secretary of Commerce for Intellectual Property and Director of the USPTO Michelle K. Lee gave remarks at a World IP Day event on Capitol Hill, stating:

“We have seen the profound impact that good ideas, protected through a world-class IP system, can have on humanity. From new and powerful technology that we can wear on our wrists and carry in our pockets, to new methods of diagnosing and treating disease, intellectual property can not only improve lives, it can save lives. It can also create new jobs and grow our economy, which is why we must always ensure that our IP system supports small businesses, startups, and individual inventors.”

(This article originally appeared in The Hill)

I strive to teach my daughters that they can all invent the next best mousetrap. As a capitalist, I then start discussing ways they could make money off their invention. That might not be the parenting style for everyone — it sometimes isn’t even the type of parenting that my wife likes.  But the reality is, the incentive of profiting from your invention is what drives the innovation and progress — and that starts with protecting Intellectual Property.

As we celebrate World Intellectual Property Day, I think that this is important to talk about because when we think about invention, we don’t often think about the money-side of the equation, but without those incentives most inventions would never have made it off of the shelf.

That is what makes World Intellectual Property Day so important; it is a day for the whole world to celebrate the protection of ideas. It is a day to celebrate not only innovation, but also the incentives that Intellectual Property and patent protection provides innovators to take risks — and what has driven the U.S. to lead the world in innovation. Invention is expensive, for the garage inventor the expense could mean maxing out their credit card, it could mean leveraging their home equity, and even asking friends and family to do the same.

To read the rest of Charles Sauer’s article, click here.

In his first speech to Congress, President Donald J. Trump finished strong, talking about how inventors can make the American economy great again. You might expect that from a branding pioneer. His billions are built on intellectual property; the Trump Organization owns hundreds of trademarks around the world.

In fact, it’s a family legacy: his uncle John G. Trump‘s patented radar and cancer tumor laser inventions won recognition from Presidents Truman and Reagan. His son, Donald J. Trump Jr., has been a patent licensing investor and executive. Ivanka Trump has her own trademarks worldwide.

Even the Republican platform specifically states patents are private property – rights inventors rely upon to create jobs and bring new ideas to market. So, you might think a Trump White House would be as pro-patent as Trump Tower. But it’s not.

Sign our Petition – State of the Patent System and Required Legislation

State of the Patent System and Required Legislation

Patents are now liabilities for inventors. Our USPTO discourages the creation of new technologies by enabling big corporations to crush startups and inventors.

Congress must act to stop this damage to our economic engine and the American Dream.

Eliminate the Patent Trial and Appeals Board (PTAB)

The PTAB is a tribunal within the U.S. Patent and Trademark Office (USPTO) that treats issued patents as a public right, not a property right.  PTAB’s invalidate at least one claim in more than 95% of the ISSUED patents reviewed rendering most patents valueless for funding at an early stage.  Invalidating just one claim can neuter the enforceability of the entire patent.  Big corporations are filing multiple PTAB procedures on the same patent driving the cost of defending it into millions of dollars and scaring investors. The PTAB must be eliminated so patents can attract investment at early stages.

The abstract idea exception is creating chaos by failing to define what is or is not an abstract idea.  Today what is patentable is completely in the eye of the beholder and often different branches of government come to different conclusions on the validity of the same patent.

Injunctive relief was the default judgment for infringement for over 200 years serving as a strong deterrent to patent infringement, and was the basis for projecting the future value of a patent at the earliest stages. Patents are critical to attracting investment to commercialize technology.

In 2006 a Supreme Court decision, eBay v. MercExchange effectively eliminated injunctive relief. Investors cannot project the future value of a patent, and as a result investment in patents has dropped. With the most powerful deterrent now removed, “efficient infringement” exists.

End Track I Examination in the USPTO

First-to-invent changing into a first-to-file system created the opportunity for unscrupulous people to steal inventions by filing for patent protection ahead of the actual inventor. Inventors must now file for patent protection as soon as possible before disclosing it to anyone to determine the invention’s viability, marketability or costs.  This adds upfront costs for unproven inventions to the people least able to afford it.  First-to-file is discouraging inventors to the point of abandoning the patent system.

While we have damaged our patent system, China has strengthened theirs.  Today, China leads the world in new patent filings.  Large amounts of venture capital that once fueled early stage startups in the U.S. have moved to China.  As a result, startups are fleeing to China.

Congress must act to correct this damage to allow the U.S. to succeed in the modern innovative world.

It would appear as if Obama holdover Michelle K. Lee continues to run the USPTO. More than six weeks after President Trump’s Inauguration Lee is delivering remarks at PPAC and PTAB Bar Association on March 2, 2017, appearing as a speaker at industry events (e.g. AUTM), signing notices published in the Federal Register, and signing newly issued U.S. Patents. This could be a very expensive problem for inventors as these patents end up in litigation and defense lawyers inevitably challenge the validity of any patent issued and signed by Lee because there is no clear authority for anyone to sign patents until an official announcement has been made on Lee’s statuts.

The lack of transparency surrounding Lee’s status is but one serious problem at the USPTO; there are others. Take for example the story of how the USPTO under Michelle Lee is pushing a fee increase. We first alerted the Patent Public Advisory Committee (PPAC) in an open letter outlining the problematic nature of the USPTO fee increase just ahead of the first quarterly meeting on March 2, 2017. A major issue is that fees for examination, where the USPTO creates patents, are being internally diverted to the PTAB, where the USPTO destroys patents. Yet, the USPTO wants to increase examination fees anyway, presumably so those fees can still be diverted to fund the financially failing PTAB. The PPAC accepted the letter and will soon publish it on their site.

The contents of our letter were not discussed at the most recent PPAC quarterly meeting, but it was acknowledged for receipt and it appears some PPAC members wanted to discuss it. However, during that meeting serious questions came to light about whether Lee’s USPTO is undermining President Trump ‘One-In Two-Out’ Executive Order.

President Trump’s ‘One-In Two-Out’ Order (formally Presidential Executive Order on Reducing Regulation and Controlling Regulatory Costs) mandates that whenever an executive department or agency publicly proposes for notice and comment or otherwise promulgates a new regulation, it shall identify at least two existing regulations to be repealed. Moreover, under the ‘One-In Two-Out’ Order, the costs of any new regulations must be offset by the elimination of existing costs of at least two prior regulations. The ‘One-In Two-Out’ Order broadly defines the term “regulation” or “rule” to mean “an agency statement of general or particular applicability and future effect designed to implement, interpret, or prescribe law or policy or to describe the procedure or practice requirements of an agency.”

To read the rest of the article, Click Here.

US Inventor recently submitted an open letter to the Patent Public Advisory Committee (PPAC) at the USPTO. This letter is to inform PPAC of our concerns related to the proposed fee increase, USPTO transparency, and issues surrounding the PTAB including diversion of fees from examination to the PTAB.

US Inventor has signed onto a Brief in support of Petitioners Retractable Technologies, Inc. and Thomas J. Shaw.

Amici include nonprofit inventor clubs and individual inventors and entrepreneurs. The nonprofit inventor organizations represent over 20,000 inventors, startup owners and executives and others interested in their success. The amici have spent substantial portions of their lives inventing, building new companies and competing in new markets as well as educating and mentoring new inventors and entrepreneurs. They represent the driving force of the world’s most powerful economy. Amici’s extensive experience with the patent system, new technologies and starting up companies and the resulting ties to the health of the American economy make them well situated to explain the importance of the issues presented in this case.